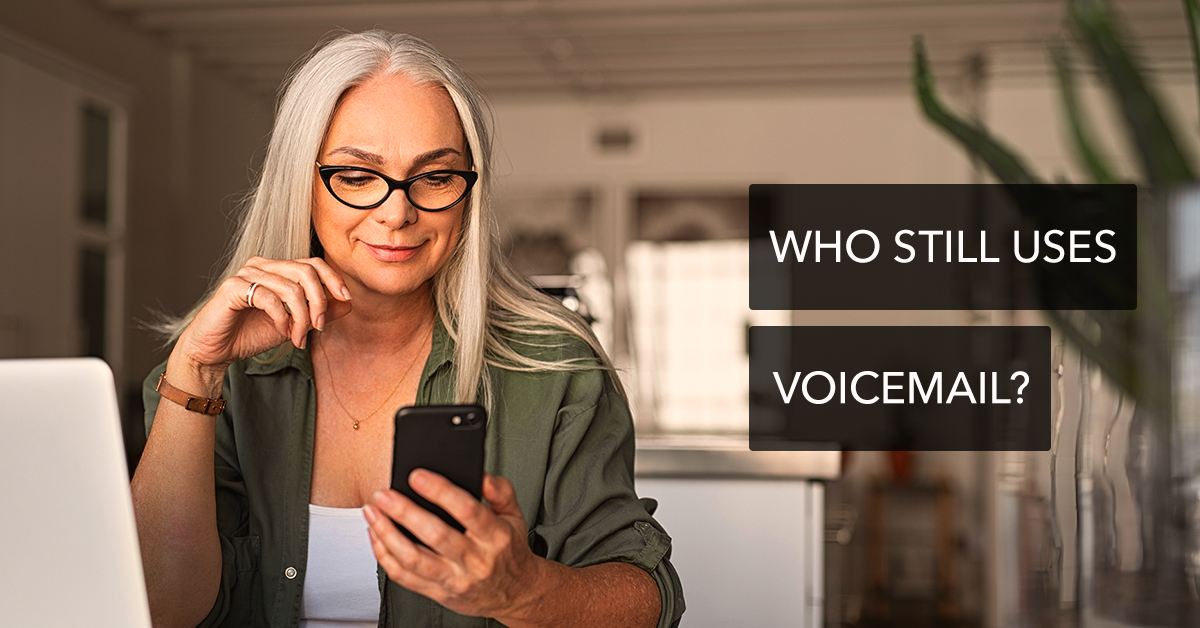 If you ask who still uses voicemail, the responses might indicate that scammers are the main users of voicemail. Your customers may also inform you that they personally rely on SMS or other types of messaging rather than voicemail. With caller ID built into smartphones, it's easy to see missed calls. There's no doubt that scammers employ computers not just to spam people with calls but to "speak" to them in an attempt to phish personal information from unsuspecting individuals. But business users still rely on voicemail, which can offer privacy and security that other messaging options lack.

The State of Voicemail in 2020

Some companies have moved away from voicemail. Notably, Coca Cola dropped voicemail in 2014 to save on money, and JP Morgan moved to a model where only 35% of its staff would keep voicemail. Other companies allow their users to opt into voicemail services but do not offer voicemail by default. However, companies that may not receive incoming voicemails may still leave messages for their clients. Those companies that want to make a sale through cold calls frequently rely on scripted voicemail messages to attract information and encourage potential clients to call them back.

Another group of people who still use voicemail quite often and actually prefer it to text messaging is Baby Boomers, a reality that's not surprising given their long-time reliance on voicemail (and answering machines) before texting became commonplace. Many older smartphone users also prefer to send and receive messages via voice because they struggle to read and/or type messages on a small screen. Boomers also appreciate the added level of privacy that voicemail affords as access typically requires a password or pin. Did you know that this cohort of the population is the most concerned about data privacy? According to a 2019 report on data privacy, 47% of Baby Boomers were very concerned about data privacy compared to only 29% of millennials.

While voicemail is still used frequently in business and by older consumers, there's no denying that the traditional voicemail retrieval process was not user friendly. It's not surprising that most smartphone users in 2020 don't want to dial in to a voicemail box, listen to a message, write down a call-back number, and then place a return call. Visual voicemail (VVM) apps saw widespread adoption about a decade ago because they streamlined this painstaking process by enabling users to navigate through previous messages, return calls, auto-forward voice messages to email, and access voice messages on multiple devices all within the same app experience.

Many VVM apps also offer voice-to-text (VTT) transcription as an add-on service because it further modernizes the traditional voicemail experience by enabling users to consume voicemails as text messages. As texting is perhaps the most prevalent mobile activity in the world, it's hardly surprising the VTT services are highly valued by mobile users across all demographics.

A benefit of VTT that is often overlooked is that it can function as a Text Telephone (TTY) alternative for deaf and hard-of-hearing users. Although Apple has added TTY features to its phones, hundreds of phones are available, and not all of them have that function. And even though many TTY makers have brought their devices into the modern era and made them compatible with smartphones, users do not always have access to them.

Visual voicemail offers other uses. For example, users can privately and discreetly check messages without an audio component or complete other tasks simultaneously. This ability is handy for those users who may be screening calls to avoid scammers. Reading visual voicemail often takes less time than dialing and waiting for an audio message, especially if it's short. The ability to reply by text, if that's an appropriate action, only further emphasizes the usefulness of enhancing voicemail with a text messaging component. Users can also more easily save information in a text-based form for future reference than they can with traditional voicemails. Gleaning information from text takes less effort than from voicemail, too.

Offering services that make voicemail more useful and easy to use is a win-win. These services improve the user experience and boost subscriber satisfaction while also creating additional revenue streams for mobile operators. While some users are happy to use ad-based "freemium" visual voicemail apps, others will happily upgrade their plans for a few dollars a month to remove ads from their VVM client or activate premium features like VTT. Providing limited-time free trials of the ad-free VVM experience and the premium VTT functionality is a proven strategy to boost adoption of mobile-based services.

In 2020, phones are no longer the only way to access voicemail, either. Providers can also appeal to the 52% of the population that own tablet computers by providing unified messaging apps for these devices. Furthermore, the 21% of the population that is accustomed to checking messages from their smartwatches and not their phones in certain situations may be an untapped market. Just like these devices don't replace smartphones, text messaging doesn't have to replace voicemail. It can complement it and visual voicemail is one way that the services can work together.

Finally, it may help to identify that demographics that are likely to still use voicemail and emphasize to customers the ways that text-based messaging can actually save time in some instances to encourage subscriptions to premium services such as VTT. An emphasis on modern voice-to-text transcription can attract new customers, ultimately increasing revenue.

Customers who may have moved away from using voicemail may reconsider its utility when you provide visual voicemail and premium features such as voice-to-text transcription that make it easier to receive and respond to important messages—a callback from your doctor or a message from your child's school, for example—even if those messages come from unknown numbers. In fact, modern voicemail features may be exactly what we need to combat phone scammers.

Stay Up to Date